In the last post, I talked about the most important thing you need to remove from your diet: guilt. I mentioned that ridding yourself of guilt is one of the critical steps towards breaking the diet-sabotage cycle and overcoming overeating. If you missed it, definitely read that first>>>

As you know from my post about how I eat what I want, my trademarked slogan is to ‘move the hell on.’ Guilt – as it relates to feeling guilty about overeating or emotional eating – is the result of two things: rules and self-criticism.

In order to feel less guilt, you have to address these two things.

If you still have a pseudo diet mentality kicking around and have lingering beliefs that you ‘should’ or ‘shouldn’t’ be eating a certain way – whether that be certain foods or amounts or slowing down and saying prayers to the Universe while you eat a baguette etc. etc. – then you’re going to feel guilty when you break that form of conduct.

When there are no rules to break, there is no guilt to be had.

Self-criticism is the other beast that causes us to feel guilty.

For many messed up reasons (that would require a Hunger Games trilogy to detail), we are conditioned to beat ourselves up.

When we feel inadequate or insecure, we cast very harsh judgments on ourselves over the littlest things and immediately get trapped in ‘I suck’ mode.

We focus and simmer on inconsequential behaviors – such as the fact that you ate too many chips on Sunday – and fail to recognize the billion other areas where we are kicking ass.

This is another reason why the self-compassion and acceptance piece is so important. When you feel like you are enough as you are right now and can forgive yourself for shortcomings, it’s not a big deal when you eat too many chips.

So what if you started to tell yourself a different story? What if you stopped throwing yourself under the bus all the time?

What if instead of walking around sulking about how you should be pushing harder and doing more and eating slower, you started to feel chuffed about the billion things you already do? Do you see how this works?

Once you start to live in the chuffed zone, you’ll be able to let your misadventures in eating slide and truly ‘move the hell on.’

Here are my top 5 ways for ‘moving the hell on’:

Detach yourself from others who enforce these types of rules (Facebook, I’m looking at you). You can eat what you want!

#2) Remove ‘should’ and ‘shouldn’t’ from your food vocab.

Own your reality in order to let it go, learn from it and move on.

For example, instead of saying “I’m such a hippo, I shouldn’t have had that grilled cheese after dinner…I’m so overly stuffed now.” Say, “I ate grilled cheese to ease the fact that I was really stressed about working a 12 hour day. It’s not a big deal. Next time, I will ask for help and give myself more downtime. Tomorrow is a new day.”

#3) Take note of all the reasons you feel chuffed.

Journal it. If you need help with this, then make sure you are spending time on self-love!

You are not an equation to be solved. Forgive yourself and move forward. Trust that your body will balance itself out.

#5) Douse yourself in kindness.

This seems counterintuitive because we immediately feel the need to course-correct and punish ourselves when we overeat. Punishment fosters further pain around your actions… and then we turn to food to ease that pain. Treat yourself like an injured puppy and be kind. 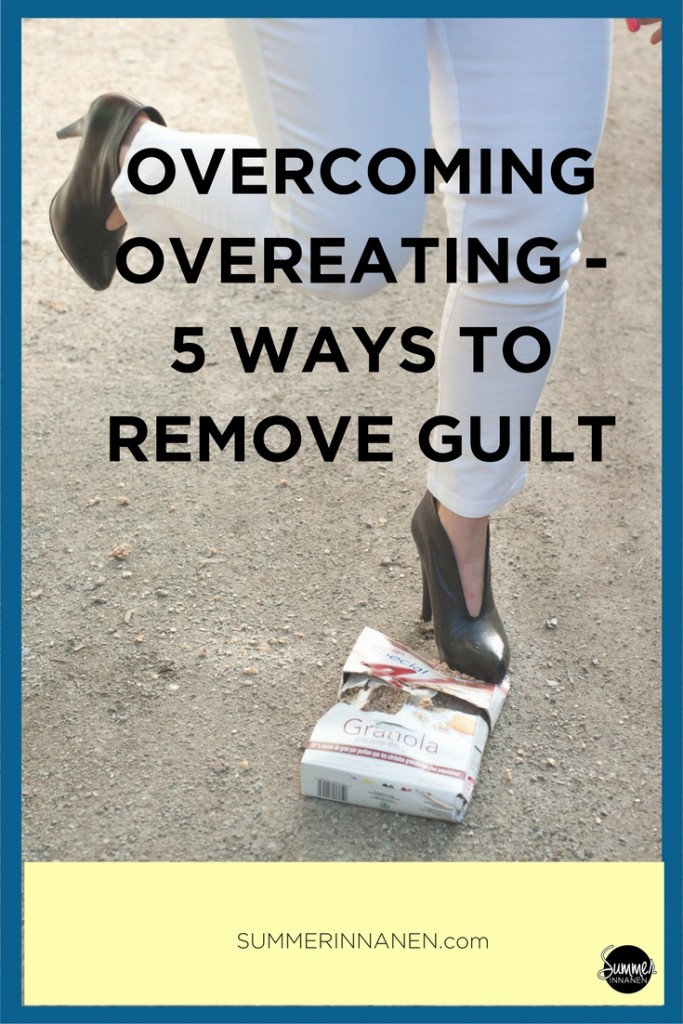